Demonstration – The demonstrator for this month will be Season Heise, who will be focussing on some further acrylic techniques.

Season is well-known to members, having recently served as President of the Society.

She is one of the many artists who live in the Yarra Valley.

Season is a painter whose long immersion in the world of French painting has yielded an oeuvre of fashionable and decorative images of modern Australian life. Her debt to the French Fauvists, particularly to Raoul Dufy, is apparent, for within her works one can draw parallels to Dufy’s Bouquet de tulips et anemones or to the Feuillages et Perroquets and especially to Le bouquet de lys.

The impressionist landscape painters, Claude Monet and Camille Pissaro have also influenced her profoundly. Her style also reflects the Classical Japanese wood prints which became popular in art circles in Paris at the end of the nineteenth century.

As you would expect from such a committed painter, Season has developed her own distinctive approach to floral arrangements with such innovations as foreshortened perspective and the use of washes of colour.
The brightness of Season’s palette envelops objects in atmosphere. She paints with colour and movement. She is a master of depicting a calm grandeur, an extraordinary unity, a subdued radiance. Her intimate studies are sympathetic, elegant and trendsetting.

It is little wonder that Season’s French influence is substantial. Her ancestry on her mother’s side goes back to the Filluel’s from Rouen in Normandy. Durand Filluel, an ancestor in the thirteenth century was the Mairie in Normandy. Season Filluel’s scrapbook is held by the Societe Jersiaise and the Societe des Antiqiaires de Normandie. Interestingly, her favourite French painter, Raoul Dufy also lived and painted in Normandy.

The Musee Saint Gregorie at Cordes-sur-Ciel is pleased to be associated with Season, whose dazzling works continue to fill collections the world over.

One of Season’s most recent awards was a Highly Commended at the 2017 Camberwell Art Show.

Season’s demonstration is sure to inspire artists to experiment with new techniques, no matter what their interests or ability. 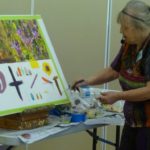 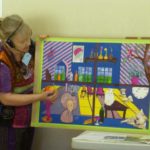 The Mt Evelyn and Yarra Valley Arts Society is a not for profit organisation catering for people involved in art and crafts throughout the Valley.

Membership is open to artists and craftspeople of all skill levels. Beginners are particularly welcome.